Matisse turns Japanese in the hands of Dahlia Drive

(Vancouver, BC)—Art imitates life and fashion imitates art as Dahlia Drive takes on Matisse during the Vancouver Art Gallery exhibit- “Collecting Matisse and the Modern Masters: The Cone Sisters of Baltimore” which runs from May 26- September 30, 2012.

Designer Wendy Van Riesen looked at the 27 signature works by Matisse in the exhibit but one piece in particular inspired her. “Striped Robe, Fruit, and Anemones” became the masterpiece that will decorate her new hand painted kimonos (pictured left) that will be sold exclusively at the Art Gallery Store.

“The Cone Sister’s collection includes many textiles and many painting of ornate textiles so I was delighted when I was asked to create a product,” explains Wendy. “Now, after you see the exhibit, the kimono will allow you to walk away as a Matisse canvas!”

Working in the Japanese flattened perspective called ukiyo-e, the kimonos celebrate Matisse and this style of art as well as showcasing Wendy’s individual talent through her one-of-a-kind Japanese-inspired kimonos that are sewn together from recycled scarves and curtains (pictured below). 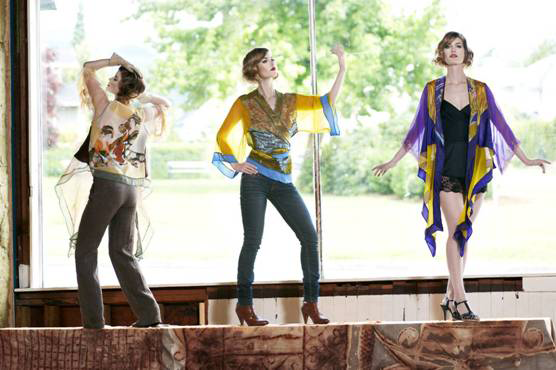 Dare to be different in Dahlia Drive.

Vancouver, BC –Daring you to explore a new style guide this year is fashion designer Wendy Van Riesen from Dahlia Drive. Urging you to trade in those floral skirts for bubble dresses and cashmere cardigans for kimonos, Dahlia Drive’s new collection reminds us that most exciting creations in life often come from the most unexpected sources.

“I like to design clothing as architectural structures that house the shape of the body as an alluring shadow within,” explains Wendy.

Inspired by this beauty of the female form, Dahlia Drive’s fall 2011 collection challenges you to dress outside the box by dressing within it. Working with pre-loved materials such as recycled curtains, saris, and vintage scarves, Dahlia Drive resurrects the fashion wasteland. Her hand painted images and avant-garde silk-screens get transferred onto already sewn garments. “That way, the image wraps around the entire body and is not truncated by seams,” explains Wendy.

Juxtapose feminine fabrics like lace and silk with masculine prints such as rusted gates and brittle bones, throw in a fun yet practical autumn palette of rust, grey, olive green and turquoise, and you’ve got yourself this couture-like collection for the price and practicality of an everyday outfit.

Youthful trendsetters can layer a translucent bubble dresses (pictured top left) over a fitted body suits to show off your fabulous figure; an office go-getter can share their creative side with playfully printed tunics (pictured top right), and Wendy’s new cozy yet sexy silky kimonos (pictured bottom) are the perfect way to go from dinnertime to playtime without so much as the loosening of a button.

Whatever your age or stage calls for, Dahlia Drive reminds you to always embrace the versatility of life by never settling for safe.

Pieces in the Dahlia Drive fall collection range from $185 – $225 and are available in stores across Vancouver such as Favourite and Twigg&hottie as well as online.

To speak with Wendy and for all other media inquires please contact: 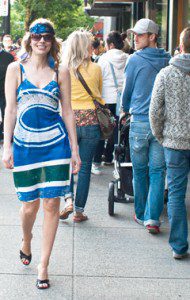 Check out the radio segment

24 Hours Reporter Sarah Rowland joined us on the show today to chat about this Canucks-inspired dress that had heads turning downtown Vancouver on the weekend!

Forget the jersey and face painting. A Vogue-inspired, blue and green playoff slip dress is the way to go for the Stanley Cup Final.

Dalhia Drive (www.dahliadrive.com) has created a beautiful limited edition “Playoff Slip” dress that every fashionista knows wouldn’t be complete without accessories – in this case, peacock feather earrings and a blue sequined flapper headband from Frilly Lilly on Hamilton Street.

Even in yoga-pant-wearing city, it was a hit with hockey fans. True, some Robson Street shoppers thought an outing in the dress on Saturday was a little premature and overzealous. But for the most part people loved it. More than a few women asked where they could find the dress while some men wanted a photo of it.

There was the occasional “you go girl,” and one enthusiastic fan pointed and shouted in the middle of street “that woman is a hero.”

Funny thing is, these comments seemed to happen while walking away from crowds. But when walking toward people in this slinky number, it was like a parting of the sea. And I’m pretty sure I’m not Moses, so this knee-jerk reaction to clear the way and avoid eye contact might have had something to do with the transparency.

The designer warned against wearing the dress without leggings. But oh no, I just had to kick it natural with nothing but a thong and a thin blue, hand-painted hockey stick to cover my butt.

As a result, whenever I walked into pockets of sunlight, my arse was on display for the whole world to see. That’s one theory anyway – the other is some people just thought I was balls-out crazy?

No matter. After a long day of showing my team spirit (among other things), I was thirsty. So I headed to One Hundred Nights at the Opus Hotel for a well-deserved Canuck cocktail. You know what they say? Nothing screams “Go Canucks Go” quite like a scantily clad, fashion reporter sucking back a blue-tinted drink – except maybe a hardcore fan flashing her boobs during the game. But that’s not gonna happen. These girls are for private viewings only, so keep those drinks coming and Go Canucks Go!!!!

(Vancouver, BC)—If you are a female hockey fan how do you show your support for the home team? Flash your breasts; grow a beard; wear an oversized jersey; or drink a keg of beer? Dahlia Drive has a better solution, limited edition Playoff Slips.

Designer Wendy Van Riesen helps female hockey fans cheer on the home team with a sexy flair. Her reworked vintage slips have lacy details, Canuck colours of blue, green and white, and a cheeky hockey stick running down the spine. It’s a more feminine look than a head to toe green body suit.

“It’s been 14 years since the Canucks were in the Stanley Cup playoffs so this year’s team is resurrected a wasteland much like I continually do with fashion,” says Wendy. “Their fight and the city’s support for the team is really inspiring to me.”

Dahlia Drive has been using antique slips to make one-of-a-kind dresses that peel back the layers of femininity since 2005. The soft edges of lace and sweetheart necklines are resurrected with a mixture of colour, imagery, and embellishments.

And now thanks to Dahlia Drive, centre ice has never looked so good.

I was very honored when this bride approached me to design the outfits for her wedding party. 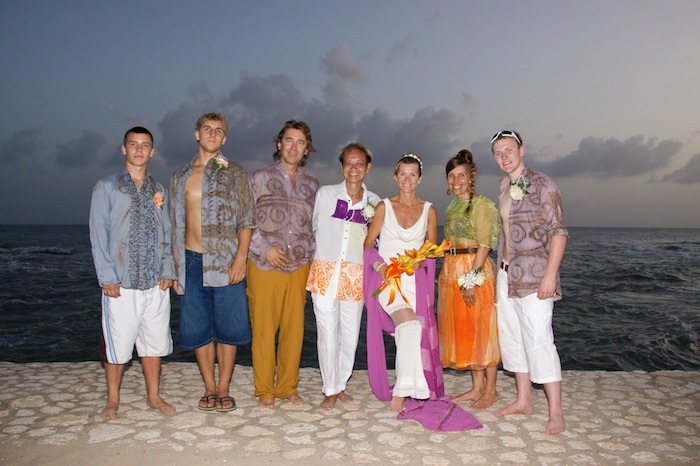 Dahlia Drive Takes One Of A Kind In Toronto!

I had just the greatest time at the One of a Kind show in Toronto last March. There I launched one of my newest products, the ‘Bubble Dress’. The dresses are made out of old curtain panels and are see-through so that you can sport one of my slips, a bathing suit or whatever you like underneath. In this photo my niece Erin is wearing my new Lace design and I am sporting the new Bubble Dress.
What do you think? 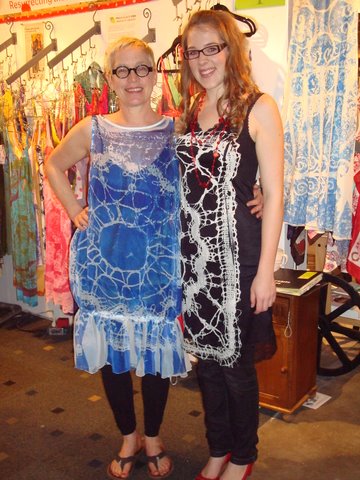 Some of my newest pieces were highlighted on the runway at last month’s EP!C… here’s a few of my favourite shots! 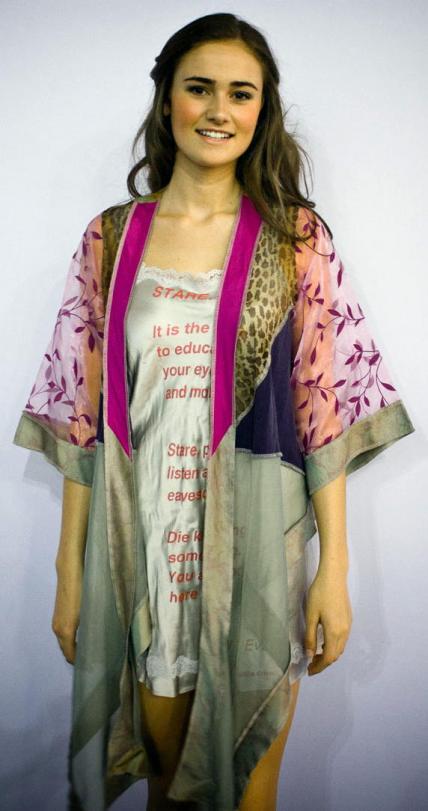 hese dresses can be any brides’ “something old and something new”. Beautiful, elegant, personal and doesn’t cost an arm and a leg! Both of these dresses feature a gate pattern but you could use whatever you like! 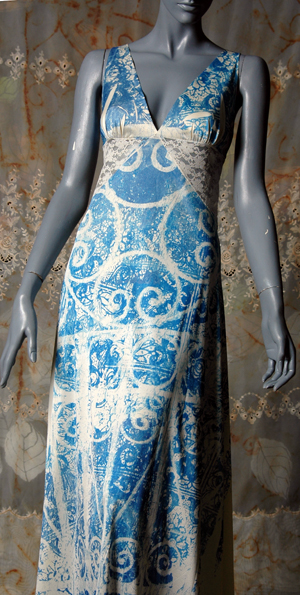 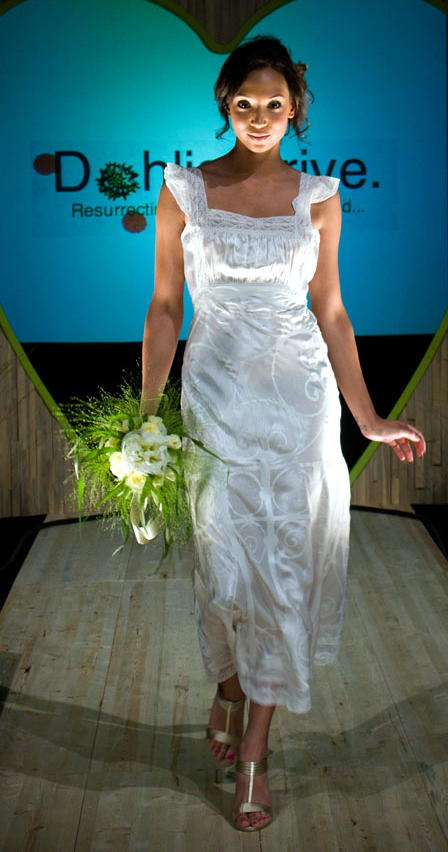 DD At The Vancouver Art Gallery!

The VAG loved me soooo much during the Leonardo da Vinci exhibit that they just had to have me back for their new Modern Women themed exhibit!

I currently have T shirts, scarves, slips and yes even bags in their gift shop. Next time you’re downtown why don’t you pop in and check me out… I dare ya!

Here are some examples of the newest art influenced slips I’ve been creating, a tribute to Chagall and stained glass windows:

This is an ongoing project and my most exciting to date. I love Chagall and am intrigued by the translucent colours I can create with disperse dyes on paper so I have decided to paint Chagall’s 12 Jerusalem windows. Each window has 12 panes and each pane is painted to fit a slip. I have finished the 12 panes of Issachar and have transferred those paintings onto 12 slips. Together, they create the entire window of Issachar. I mixed a specific palette since the dyes do not represent their colour until heated and painted it freehand. The Biblical story, the translucence of stained glass, the joy of Chagall, the temple of the church all wrapped on a woman’s slip is, to me, delightful. Only 132 more to go! 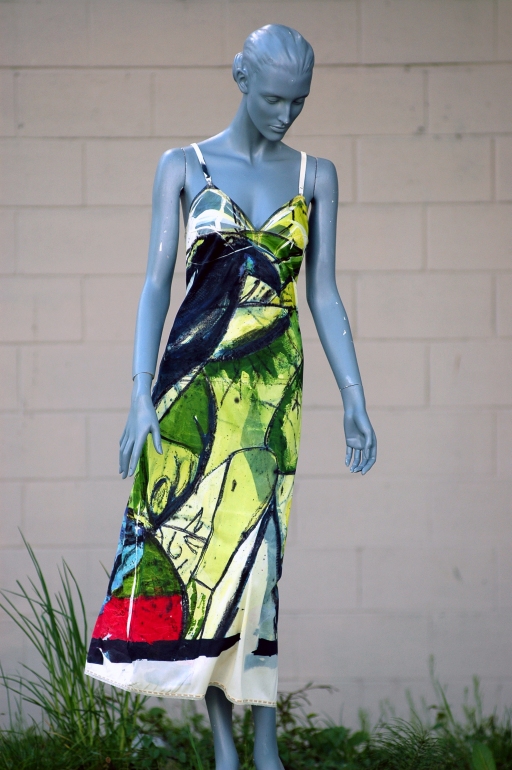 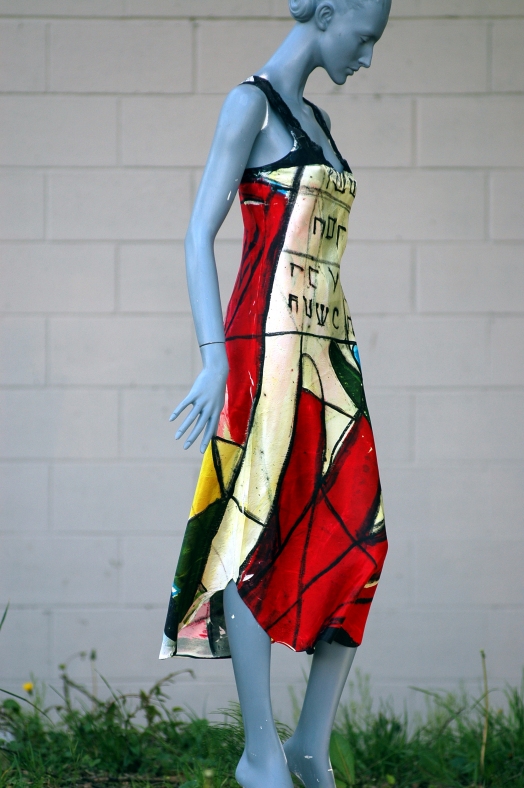